Something is Brewing in Blacksburg’s Industrial Park: Solar Infrastructure 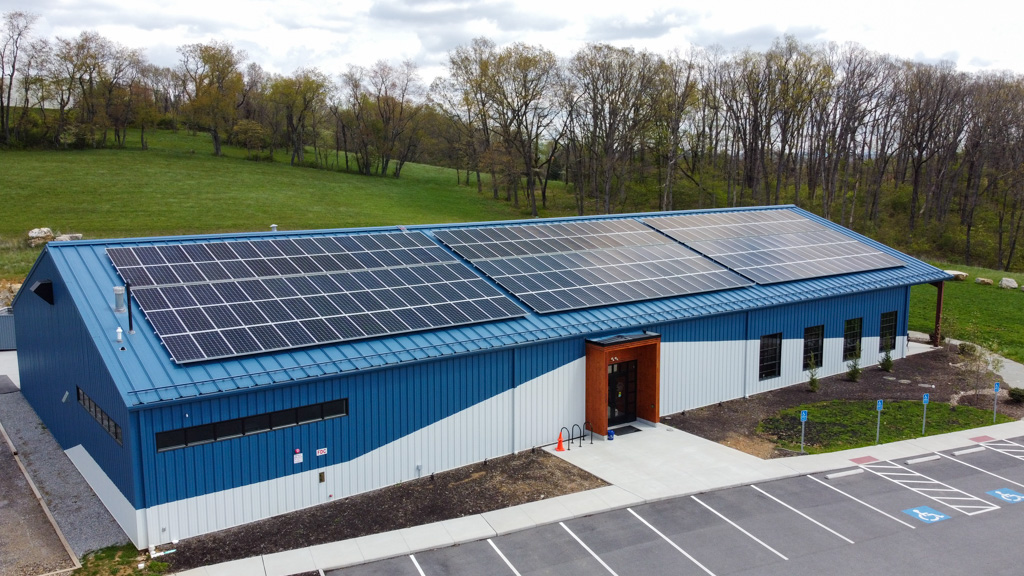 Eastern Divide is one of Blacksburg’s newest breweries, and the largest. It has already made quite the impact on the local craft beer scene! Tucked discreetly in the background of the Blacksburg Industrial Park, cars line the parking lot and surrounding streets whenever the brewery is open.

A family-friendly space, children often run around outside the brewery’s grounds while their parents enjoy a local beer or carefully cooked item from Feast & Company. On top of the bright blue metal roof is what we’re especially proud of: 225 Silfab solar panels. An amazing example of renewable infrastructure, Eastern Divide is truly creating a legacy for future generations!

Eastern Divide’s 81 kW solar array maximizes the entire western face of the brewery. Installed in two phases, the 225 solar panels help to offset the brewery’s electrical needs. When the brewery operation isn’t utilizing all of what the panels can produce, it’s sent back to the grid as well, to be used across Appalachian Power’s grid. This brewery is Blacksburg’s second solarized brewery, joining Rising Silo Brewery on Glade Road.

We installed Eastern’s Divide’s array in two stages. As we completed the final stage in the hot summer sun last year, we were very satisfied with a job well done, creating solar infrastructure in Blacksburg that truly puts the brewery’s roof to work!

In addition to the 81 kW solar array, we also outfitted the property with a class-leading eGauge consumption monitoring system. We offer this monitoring system to all of our customers, both for residential and commercial clients. The system allows users to see circuit-by-circuit consumption in real-time, from anywhere with an internet connection!

Consumption monitoring is an amazing way for our customers to understand what circuits in their home or business use the most power and work on ways to reduce their impacts. At a commercial scale, the payoff can be very swift. Large, industrial appliances often use a lot of power at times you don’t expect. With this sort of monitoring, you can see and track exactly what’s using power and when. It’s already saved Baseline customers a lot, both in terms of electrical consumption and environmental impact.

Eastern Divide will soon be in good company in the industrial park, with more solar infrastructure coming soon! We’re installing solar at Mountain Precision Tool as well, right up the street from the brewery.

Industrial customers really stand to gain significant energy savings via solar installations. With federal tax credits available–26% for the rest of 2020–as well as depreciation and USDA grants available, now’s truly a great time to go solar. Don’t forget about ground-mount options as well. Your solar doesn’t have to be on the roof!

Give us a call or get in touch today to learn more about what solar can do for you!